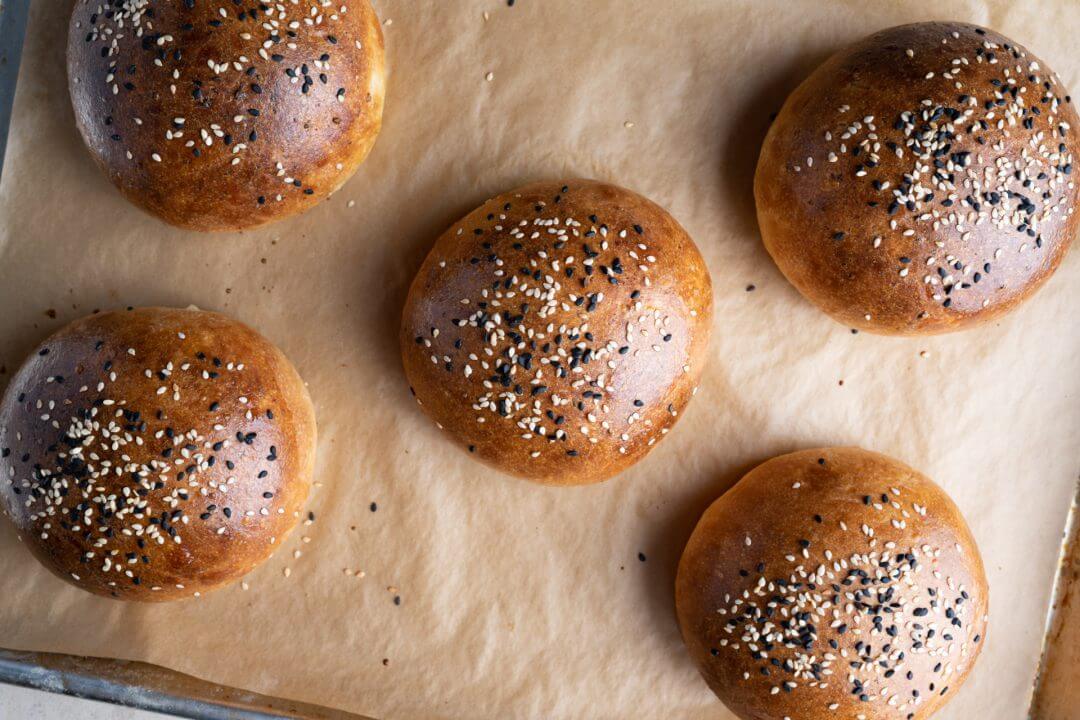 These soft sourdough potato buns call for the addition of an unapologetically high amount of baked and then riced potato. This fluffy potato mess brings all the gelatinized starches of the baked potato straight into the dough mix6, imparting the best kind of softness to the baked buns. When you bake a dough with an excess of starches, you transform the result into something delicate and light beyond what you might expect. Right out of the oven, I feared one might disappear straight into my mouth. And while that may or may not have happened in my last test bake, I'm sure you're going to love this recipe.

In eating these, you'll find the flavor of potato isn't all that apparent. But our friend, the tuber, has a more critical role: improving the texture. And this amplified texture plays so well with the running flavor undercurrent we come to expect from natural fermentation: subtle complexity, a touch of sourness, heightened “wheaty” flavors, and thanks to the small bit of sugar, the slightest suggestion of sweetness.

These buns are fantastic sliced in half and grilled right on the hot grate; the exterior rapidly becomes crispy, whereas the interior retains the majority of its initial softness. And the juxtaposition of the two makes for perhaps the best hamburger bun I've ever eaten. “Ahh, the platitudes!” you cry—no, really, these are that good.

When compared to the buns you might find in bags at the market—which always, ALWAYS, disappoint with their marshmallow (in a bad way) texture and flavorless composition—these are in another class altogether. And while they're a little extra work preparing the potato, it's justified.

The small margin of extra work isn't much, but I've found a few tools that help make these even more manageable — and all the tools will be useful in your other baking endeavors without a doubt.

First, a few of the tools and ingredients I use to bring these buns together:

The goal for these buns was softness, softness, and more softness. But for flavor, I wanted them minimally sour. Building a fast, high-inoculation7 levain with 100% white all-purpose flour will help in this pursuit, and after testing with combinations of whole wheat—and even whole spelt—I dropped back to using all white flour. Whole grains are wonderful in a hamburger bun, but there's a real joy in a supremely soft bun with a delicate flavor.

This recipe is a direct process recipe, meaning it's started and baked the same day with no overnight, cold-proof (retard). You can begin the dough first thing in the morning when your sourdough starter is ready and finished before dinner. Alternatively, if you want to split this over two days — which might introduce a touch more sourness, I would place the dough after 2 hours into bulk fermentation into the fridge, covered. The next day, take the dough out, divide and shape, and proof until ready (this might be 2-4 hours at room temperature).

In addition to the above ingredients, you'll need one more egg and a tablespoon of whole milk or heavy cream for the egg wash.

Mix the following ingredients together in a container and leave covered to ripen for 3 hours. Be sure to keep it warm—and warm the mixing water if necessary—around 78°F (26°C).

Note: Baking vs. boiling potatoes: I prefer to bake the potatoes instead of boiling them to prevent the absorption of extra water, which might add hydration to the dough. Additionally, baking ensures maximal potato starch gelatinization, which results in a light and fluffy texture10.

Preheat the oven to 350°F (178°C) with a rack in the middle. Grab three or four potatoes that together weigh at least 300g or so — you will need a little extra to avoid coming in short (I baked 3 and had a little leftover) and scrub the skin clean under running water. The recipe calls for 203g of potato flesh so make sure the potatoes you're baking are a little over this to cover any lost potato in processing — go for 300g to play it safe.

Place the whole potatoes into a small roasting pan or dish and, with a fork, prick the skin around the potatoes several times to allow them to breathe during baking. Bake the potatoes for about 1 hour, flipping them halfway through. Remove them from the oven when a knife can easily slide into the center of the potato (internal temp of 208-211°F / 98-99°C).

Soften butter: Take out the called for 112g butter and cut it into 1/2″ pieces. Let the butter sit out on the counter until called for later in mixing.

I used my KitchenAid stand mixer to mix this dough. It's possible to mix this all by hand, but it will be challenging with the added butter (the potato shouldn't be a problem at the end). If you choose to do it by hand, you could knead the dough in a bowl with a wet hand or slap/fold on the counter.

Mix and strengthen the dough: To the bowl of a stand mixer, and when your sourdough starter is ripe (see the image, above), add the ingredients below.

Note: the butter and potato will be added later in mixing once the dough has sufficient strength from mixing.

After the rest, mix on speed 2 for another 2-3 minutes until the dough again begins to cling to the hook and look smoother. If you did a windowpane test at this point it would not pass, but it would start to show a thin membrane forming.

Add the butter: The butter should be at room temperature at this point: a finger press should easily press into the butter with little resistance. With the mixer set to low speed, add the butter, one pat at a time. Continue mixing on low until all the butter is added and the dough again becomes one cohesive mass.

Transfer your dough to a bulk fermentation container and cover.

At 72-75°F (22-24°C), bulk fermentation should take 3.5-4 hours. During this time, we will strengthen the dough through a series of stretch and folds directly in the bowl.

Chilled dough option: This dough is very, very soft. I shaped the dough right at room temperature, but if you want to make shaping a little easier, place the bulk container in the refrigerator for 20-30 minutes until the dough cools and slightly firms to the touch.

Line two baking sheets with parchment paper. Liberally flour your work surface and, using a bowl scraper, gently scoop the dough out to the floured area. Lightly flour the top of the dough and divide it into ten 120g portions.

Lightly flour the top of the resting dough pieces. Using floured hands and a bench scraper, shape the portions into tight balls. As seen above, after I shaped the dough into a ball, I used the bench scraper to push the dough against the work surface to impart a tight skin on the outside.

For more shaping instruction, see my guide page to shaping buns and rolls.

After all the pieces are shaped, cover each baking sheet with a large, reusable plastic bag and seal shut. To keep the bags up off the dough, place something tall, like a small cup, in the bags before closing.

Proof for 2.5 hours or longer until the dough has puffed up considerably. When gently poked, they should feel extremely soft and yield immediately to almost no pressure. If you notice the skin on the dough starts to tear during the end of the proof, bake them immediately.

Preheat your oven to 450°F (232°C) with one rack at the bottom third and another at the top third.

Make the egg wash: in a medium bowl whisk together one whole egg and 1 tablespoon of whole milk. Whisk until no lumps remain and the mixture is frothy.

Uncover your baking sheets and, using a pastry brush, paint on an even layer of the egg wash (avoid drenching the dough, the wash will just pool at the base and crack in the oven). Liberally sprinkle on black and white sesame seeds.

Place the baking sheets into the oven and bake for 25-30 minutes until well colored. Rotate the pans halfway through baking. Because of the egg wash, there is no need to steam the oven.

Remove the buns to cool for 5 minutes on the baking sheets, then transfer to a cooling rack until cool to the touch. If you cut the buns too early (or eat one straight off the baking sheet), they may be excessively soft—better to wait.

The surprising thing about these soft sourdough potato buns is that they successfully thread the needle between delicacy and rigidity. I've run them through their paces as hamburger buns, dinner rolls (torn apart and dipped in all manner of sauces), and playing the structural (but so much more!) component of a classic egg-avo-tomato-arugula-chile sandwich. How'd they fare? They avoided crumbling and completely dodged the dreaded soggy bun syndrome, even with extra doses of that sweet, sweet Tapatío. Success ✅

Utterly soft and thin—that is, until they're grilled or toasted. If you want to keep the buns soft-as-can-be, then eat them as is, but I prefer toasting them directly on the grill grate — the exterior firms ever so slightly with perceptible chew at each bite.

The egg wash turns the crust into a mahogany marvel, but also surprisingly shiny when the light catches them just right. And the two pieces really entice, making it hard not to grab just one more bun…

Soft like a cloud—how else better to describe the tenderness imparted by the added potato? The interior is light and airy without being overly open, which would spell disaster for a bun or roll. Even though the potato was riced, in the end, you'd be hard-pressed to find a single potato bit left in its original form (unlike my hearth-style sourdough with roasted potato recipe).

As I mentioned earlier, these are certainly my favorite hamburger buns I've yet to create. They have a depth of flavor and subtle sweetness that's really hard to ignore, even when the buns are stacked with ingredients. If you're going the hot dog route, check out my homemade hot dog buns for an equally delicious grilling experience.

These sourdough buns with added potato are the perfect hamburger bun. Extremely soft with enough strength and structure to support anything you might be grilling.

A mix of white and black sesame seeds, if desired.

If you don't have a potato ricer, mash the potatoes while still warm with a potato masher or fork.

If you make these buns, tag @maurizio on Instagram and use the hashtag #theperfectloaf so I can take a look!

What can I do if I don't have a potato ricer?

Instead, mash the warm potatoes into a smooth puree or grate the potatoes on a box grater.

What can I use instead of eggs?

Many bakers have written back using a vegan “flax egg” substitute works well instead of the eggs in this recipe.