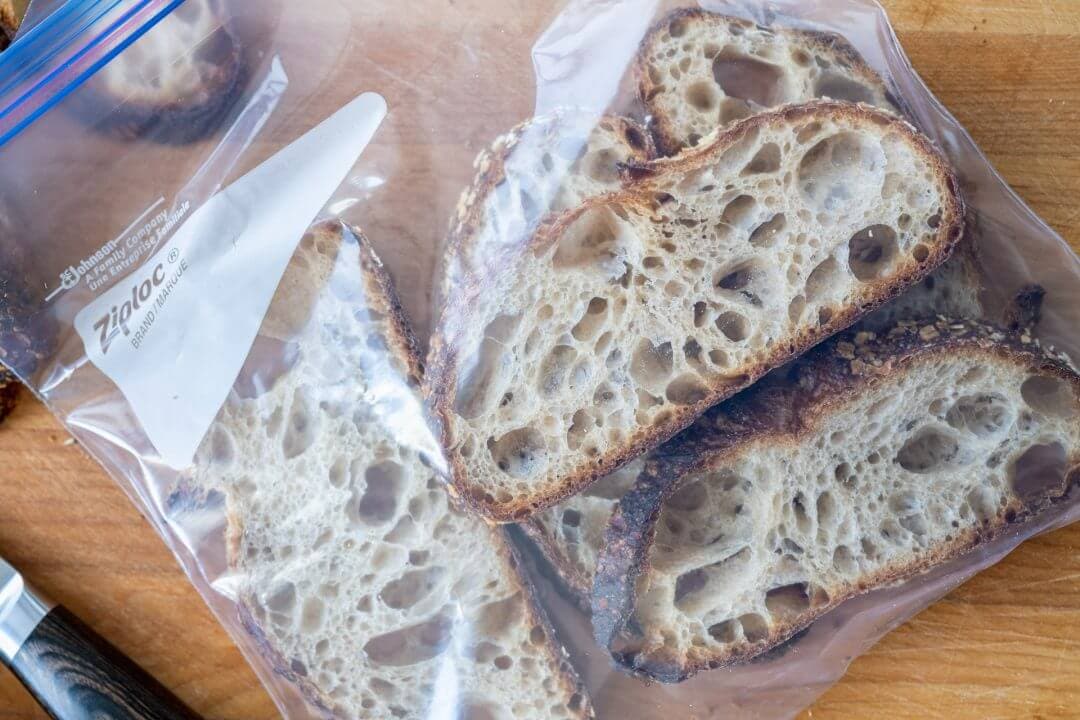 The Best Way to Store Bread

This may seem like a mundane post to some, but it's one of the most common questions I receive: what is the best way to store bread after baking it? And really, it makes sense: we spend considerable time fussing about with our sourdough starter, preparing a levain, mixing dough, and tending to it for hours—and finally, all our work culminates in the oven. But after baking (and eating), there's still the task of storing the bread, to try and keep it as fresh as possible for as long as possible.

One of the beautiful things about sourdough bread is it will last longer before staling and molding than commercially yeasted bread1.

The acidification of the dough by lactic acid bacteria in our sourdough starter and other physical-chemical changes during the breadmaking process help protect against premature bread firming and drying. These acids also help prevent molding, and in my experience (and also that of the WSU Bread Lab), they usually keep a loaf perfectly edible for a week or more—all without any chemical preservatives.

The science: from baking to staling

Before we get into solutions for the best way to store bread, we should first briefly talk about stale bread: no one's favorite, unless we're making French toast, ribollita, bruschetta, or bread crumbs and croutons, of course. But what happens behind the scenes when the dough is baked, left to cool, and on its way to staleness?

As bread dough is baking, the starch granules (which wheat flour primarily consists of) gelatinize. When they gelatinize, they swell from the moisture in the dough, and their rigid, crystalline structure transforms into a non-crystalline (amorphous) form (very similar to when you make a tangzhong or yudane). When the baked loaf is removed from the oven, it cools. From this point on, the crust and crumb begin to harden over time as starch (and most significantly, amylopectin2) undergo retrogradation, a re-ordering into a crystalline form.

This retrogradation means a hardening of the crumb as moisture moves out from the starches, eventually taking a loaf of bread from soft and pliable to excessively hard and what we identify as stale. Other processes begin to take effect with the crust as well, as it begins drawing moisture out from the crumb into itself, making the crust rugged and leathery.

In general, staling can be reversed somewhat by reheating the bread to a sufficient temperature (140°F / 60°C), but it can't completely reverse the effects of staling, and the results from heating will only last a short time. You can see this directly in your kitchen: reheat a slice of stale bread in the oven or toaster, and you'll think you almost have a slice of fresh-baked bread on your plate—for a few minutes at least.

It's also worth knowing that doughs containing some percentage of fats (lipids) will typically last longer before staling. The fat present in the dough slows the re-crystallization of the starch granules and reduces the movement of moisture between starches and proteins (de-gelatinization)3 which causes the crumb to harden.

Note that staling and drying are distinctly different processes at work. Staling can result in a firm, hard loaf of bread but is not necessarily due to the evaporation or loss of water from the crumb and crust; it's more about the retrogradation process described above. However, drying can also occur and can especially be a problem in arid climates (like where I live in New Mexico).

To avoid excessive drying, it's important to ensure bread is stored properly (cut-side-down, using a breadbox, etc.—more on this soon, I promise) so it doesn't prematurely dry to a bone.

Ok, enough science. So how do we put this into practice?

The following steps are loosely how I take a loaf of my baked bread from the oven to cooling, cutting, and long-term storage.

But first, are you using the best bread knife for sourdough bread? If you don't have a good knife, you'll squash your loaf instead of cutting it cleanly. If you have a sharp, hefty knife, read on!

After baking sourdough bread, wait to slice until it's cooled

First and foremost, it's always best to let fresh bread rest until it's cool and fully set before slicing. I know, fresh-from-the-oven is hard to resist, but your bread will not only taste better it will keep longer if you wait to cut it for at least an hour—I prefer two or more.

The reason goes back to the science behind all this: starch retrogradation is happening right as the loaf is pulled from the oven, but it hasn't progressed far enough to firm up and set the interior appropriately. Slicing a warm loaf of bread too early will result in a gummy and sticky interior.

Further, recipes containing a high percentage of whole grains, especially a 100% whole grain loaf (typically highly hydrated), or loaves that are larger (like my 1.5 kg miche), benefit from an even longer rest. In fact, I find their flavor improves 2-3 days after baking with these types of bread.

With rye bread, especially when rye is in a high percentage, it's common to let the bread rest, wrapped in baker's linen or a towel, for one or two days before cutting.

After the baked loaf is cooled and fully set, it's time to cut.

Once cool, I cut the loaf directly down the middle creating two halves (as seen above, right). This way, after slicing from the middle, I can turn the halves so the crumb faces the cutting board. This completely surrounds the interior with the (relatively) thick crust, keeping it from drying out excessively. The crust is a natural bag of sorts, keeping moisture in and dryness out.

I can typically keep my bread like this for a day or two (remember, it's very dry here) on my cutting board, which I move to a breadbox.

Note that if you live in a very high-humidity environment, you may not be able to keep your sliced bread on the counter for as long; you might have to move it to the refrigerator to prevent molding.

This is as simple as it gets: keep your cooled loaves, cut or uncut, in a bread box, and let the box do its job. I like this svelte stainless steel breadbox (seen below) which is well-made and has lasted for years in my kitchen.

Another option is to use a reusable wrap like this bread-sized Bee's Wrap. This is one of my favorite ways to wrap up longer loaves (like demi-baguettes), and the wrap works extremely well at keeping loaves soft but not too soft.

Simply place your bread in the wrap and cover it tightly. The beeswax-lined wrap will deform and wrap around all the nooks and crannies of your loaf as the warmth of your hands molds it to fit.

Plain paper bags and kitchen towels also work very well to keep the bread from drying excessively. And while many sources say never to use a plastic bag, sometimes it might be necessary, especially if your climate demands it. In the dead of winter here in New Mexico, humidity levels drop so low my lower-hydration sourdough bread almost has to be placed in a sealed plastic bag to retain some semblance of a soft texture. In this rare case, a sealed plastic bag is necessary and works well.

Don't place bread in the refrigerator

For long-term storage, a freezer is a handy option. The retrogradation process can be mostly halted by subjecting bread to very low temperatures, preventing moisture migration out of starches and their subsequent recrystallization. This means a cooled loaf can be frozen whole or sliced completely, and then the slices are frozen independently (my preference).

In practice, freezing individual slices of bread is a great way to get the best of both worlds: conveniently sliced bread that can be reheated at a moment's notice that also keeps for a very long time in the freezer (I've done a month or so, but this could probably go longer). When reheated, the bread comes out like freshly baked bread that's perfectly toasted.

Years ago, when I first started baking bread, I searched for the perfect toaster. After going through a few, I found the Breville Smart Toaster, which is the best toaster I've found: not only does it take extra long slices (like the ones from sourdough boules or batards), but it has a frozen function that works perfectly to reheat a frozen slice of bread to just the right amount. It's expensive for a toaster, but the amount of bread I go through in my kitchen justifies the expense.

The process is simple: once your loaf of bread is cooled thoroughly, slice it completely from end to end. Then place the pieces in a freezer Ziploc bag, one on top of the other, in an alternating pattern (place a layer on the bottom from side to side, then place slices on top of the bottom layer turned 90°) and press out as much air as possible. Then, place the bag in the freezer until the slices are frozen. At this point, take one or two slices out and reheat them in the toaster to your liking. The plastic freezer bag can be used many times without discarding.

This method uses a little more material to work, but it's a great option if you want an entire loaf of bread for some use in the future. A good example might be if you bake two loaves at one time, plan to eat one this coming week, but want the second loaf for the week or two after.

Once the baked bread is fully cool, wrap it in plastic. Then, take the wrapped loaf and put it into a freezer Ziplock bag. Press out as much air as possible, then stick the bag in the freezer. When you want to eat the bread, take it out to defrost in the fridge for a few days or on the counter overnight. Once it thaws completely, store it on the counter via one of the methods described above.

I'd love to hear your best way to store bread and keep your sourdough fresh. I know here in my kitchen, with the various options for storing and using bread, there's hardly ever a loaf wasted—and I bake a lot of bread!

For other practical baking guides, see how to store a sourdough starter (for short and long term) and my guide to how to store flour to keep it fresh.

If you're looking for a recipe to start baking sourdough (and freezing!), check out my simple weekday bread—a delicious bread that couldn't be easier.