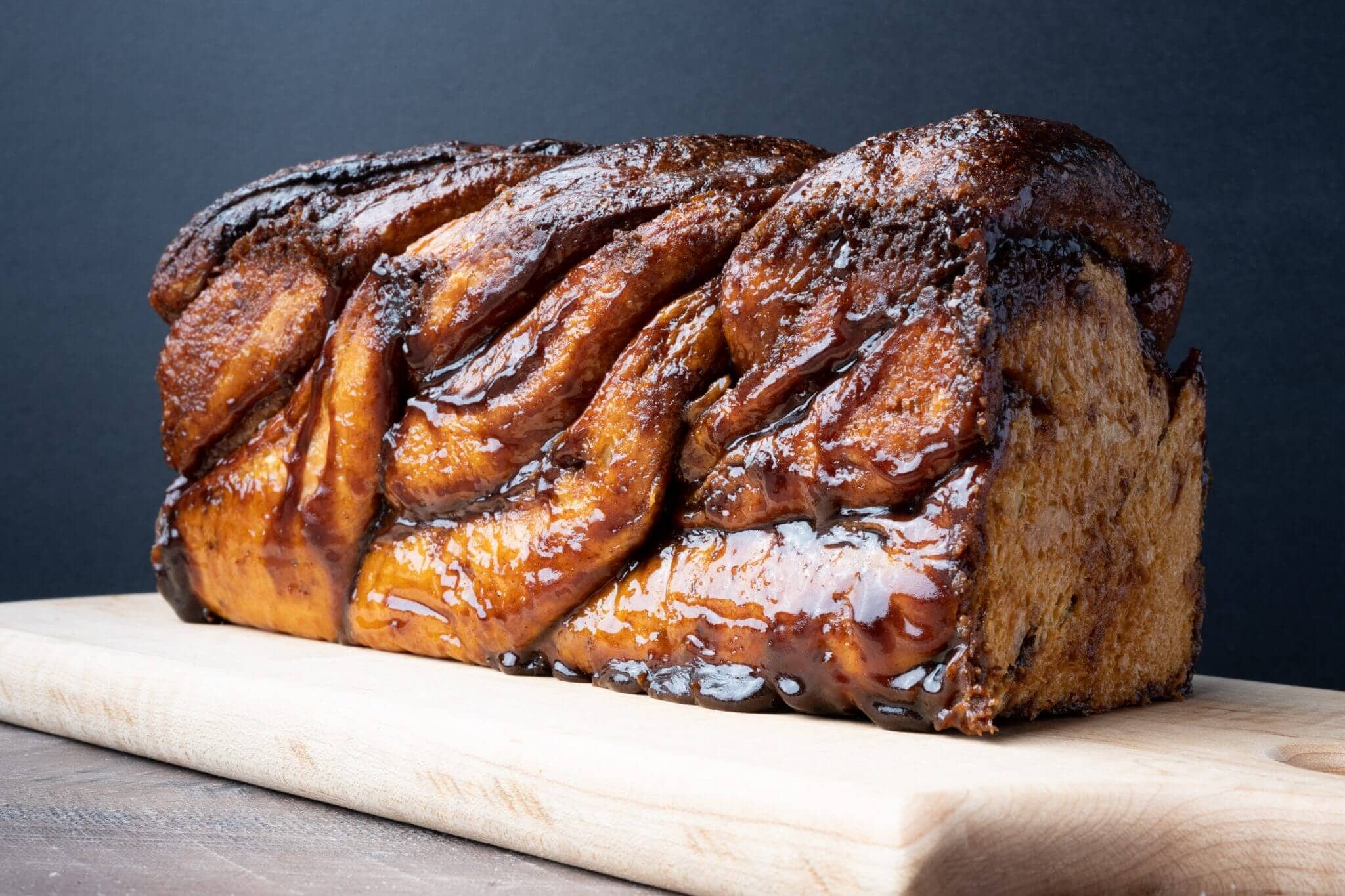 Right now I'm front-row seat at the best kind of concert: ogling at the twisted cacophony of an enriched naturally leavened dough with sharp cinnamon and warm brown sugar (Update! I've also added a chocolate filling option), all topped with a luxurious simple syrup — a sourdough babka is just sitting there cooling on a wire rack, but I swear I hear it singing. If there ever was such a thing as too much anticipation, right now surely qualifies; it's as palpable as any musical instrument in an empty music hall. And I'd pay a hefty sum to cut in, take a bite, and end the concert a little early.

I've stepped up my baking research and development for this babka in an attempt to get this recipe out after the enthusiasm displayed on my recent Instagram post. This dough is straightforward, playing at not quite the enrichment level of brioche (or my cinnamon rolls), but not exactly lean, either. I feel it's just right: not cloying, not overly rich, and certainly not dry or under-flavored. And while it unquestionably looks drenched, the interior is not — the interplay between the crust and crumb is wonderfully balanced.

But let's be clear: this is a sticky, gooey, sinfully delicious treat that makes the taste buds merrily move and pop.

And the timing for making something like this is perfect, right now we can all use a little joy; a dab of sunshine through the clouds; the sweet, tangible canto of a sourdough babka humming to itself on a cooling rack.

Grab your mature sourdough starter, pull up to the counter, and get ready to dance.

This recipe will work with many different pans, but in testing, I eventually turned to my trusty 9″ x 4″ x 4″ USA Pan Pullman Pan — I know, not common. The reason is twofold: first, I love the resulting straight-sided babka. It makes for a more presentable and tidy treat. Second, the USA Pan has a natural silicone lining and this, in combination with parchment paper, makes cleanup significantly easier (more on this later).

You'll need a standard rolling pin/dowel to roll out this dough, this rolling dowel is my favorite (and made in the USA).

In the morning, mix together the following in a small jar:

If you're new to making a levain, see my post on the differences between a levain and sourdough starter.

Before mixing, take out the butter called for in the recipe and cut it into 1/2″
pats. Let it sit at room temperature until called for.

I used my KitchenAid stand mixer to mix this dough. To the bowl of a stand mixer fitted with the dough hook attachment, add the mature levain, flour, whole milk, large eggs, salt, and half of the sugar3. Set the mixer to low and mix until everything is incorporated. Let the dough rest, uncovered, for 10 minutes.

With the mixer still set to medium, add the room temperature butter, one pat at a time, waiting to add the next until the previous is absorbed into the dough. It might take around 5 minutes to mix all the butter into the dough. After all of the butter is added, continue mixing for another few minutes until the dough smooths out and once again begins to cling to the dough hook. The dough should be almost fully developed at this point (it won't completely pass the windowpane test, but almost).

Assess the dough: has it risen a little in the bowl during the warm bulk fermentation? It should be a little puffy and smoothed out. If it looks like there's no activity at all, give the dough another 30 minutes to 1 hour and check again.

Once you see some rise in the dough, place the covered bulk fermentation bowl into the refrigerator overnight.

Same day option: I much prefer making this over the course of two days, but you could make this all in one day: let the dough finish bulk fermentation for 2-3 hours on the counter. When the dough has risen around 50% and feels puffy, proceed with the rest of the steps below. However, I do recommend placing the dough in the fridge for at least 1 hour after this warm bulk fermentation to chill before rolling out!

Before taking the dough out of the refrigerator, make one of the fillings below (keep the filling covered until ready to use):

Mix all of the ingredients above together in a bowl and cover until ready to use.

For the chocolate filling: in a medium saucepan, melt the butter. Remove from the heat and add the sugar and chocolate, stir everything together while the chocolate melts until everything comes together and smooths out. Add the cocoa powder and stir to incorporate. Set aside to cool until ready to use.

Using your hand or an offset spatula, spread the filling over the dough leaving about 1″ clean on the short side farthest from you. Starting at the side closest to you, roll up the dough into a tight cylinder. It's important for the dough to be rolled up rather tight, so pull the dough at each revolution of the cylinder.

Important: Place the rolled-up log on a baking sheet and place it into the freezer for 15 minutes (this makes it much easier to cut and braid).

Prepare your baking pan by inserting a piece of parchment so two “handles” stick up at the long sides of the pan (see photo above). The parchment will drape down one long side, over the bottom, and up the other side. Once it fits, take it out and place it on the counter next to your pan.

After the 15-minute freezer rest, take the baking sheet out of the freezer and return the dough log to the counter. Using a sharp knife, cut the log to split open the log from one side to the other. Pinch the two top halves together and braid the dough one strand over the other. At the bottom, pinch the two halves together again. Don't worry if filling spills out or things get messy — it's all good.

When the oven is preheated and the babka dough is fully proofed, place the pan on a baking sheet lined with parchment paper (to catch any sugar spilling over). In a small bowl, whisk together one whole egg and 1 Tbsp water and brush a thin layer of the egg wash on the top of the dough. Then, slide the baking sheet into the oven and bake for 40-45 minutes until the center of the babka reaches 200°F (93°C). Keep an eye on the babka in the last 10 minutes of the bake, if it's coloring too quickly drop the temperature to compensate.

While the babka is baking, make the simple syrup. In a small saucepan heat over low 52g (1/4 cup) granulated sugar with 59g (1/4 cup) water. Heat until the mixture bubbles a bit and stir occasionally until the sugar fully dissolves in the water. Transfer this simple syrup to a container to cool. If covered, it will keep indefinitely in the fridge (I reuse over and over for babka, other baked goods, or even cocktails).

When the babka is fully baked, remove the pan to a cooling rack. Using a plastic spatula, free the short sides of the babka (the sides without parchment) from the sides and bottom of the pan by pressing the spatula down from top to bottom.

After the rest, lift the babka out of the pan using the parchment paper sticking up as a set of handles. You might have to use a spatula and pry it out a bit, but be gentle. Remove from the parchment paper and let it rest on a wire rack until cool to the touch. It's even better if it sits for an hour or so to let the crust fully harden.

The flavor of this babka is just wicked. The exterior looks intense, gooey, perhaps even glutinous — but once the babka cools it turns into a thin and crunchy layer of pure enjoyment. Because of the way I braid the dough, pushing the cut-side to mostly face up out of the pan, the interior is a little more shy with fewer pockets of the filling. This creates a nice balance and doesn't make each bite overwhelming.

And your babka will certainly look different (isn't that the beautiful thing about baking by hand, anyway?), as the filling ebbs and flows its own way through each slice. Looking at a slice is like pretending you're a palm reader: you subconsciously trace the dark lines as they wind here and there, trying to see the future, to plan each bite to land you right in the next delicious zone of brown sugar and cinnamon.

You probably already know by now that I caved and cut the concert short, I sliced this babka sooner than I thought I would. While there is something cute about a fresh babka sitting on the counter with its siren song whispering in your ear, there's something much better to be had when it's eaten.

If you use this recipe, tag @maurizio on Instagram and use the hashtag #theperfectloaf so I can take a look!