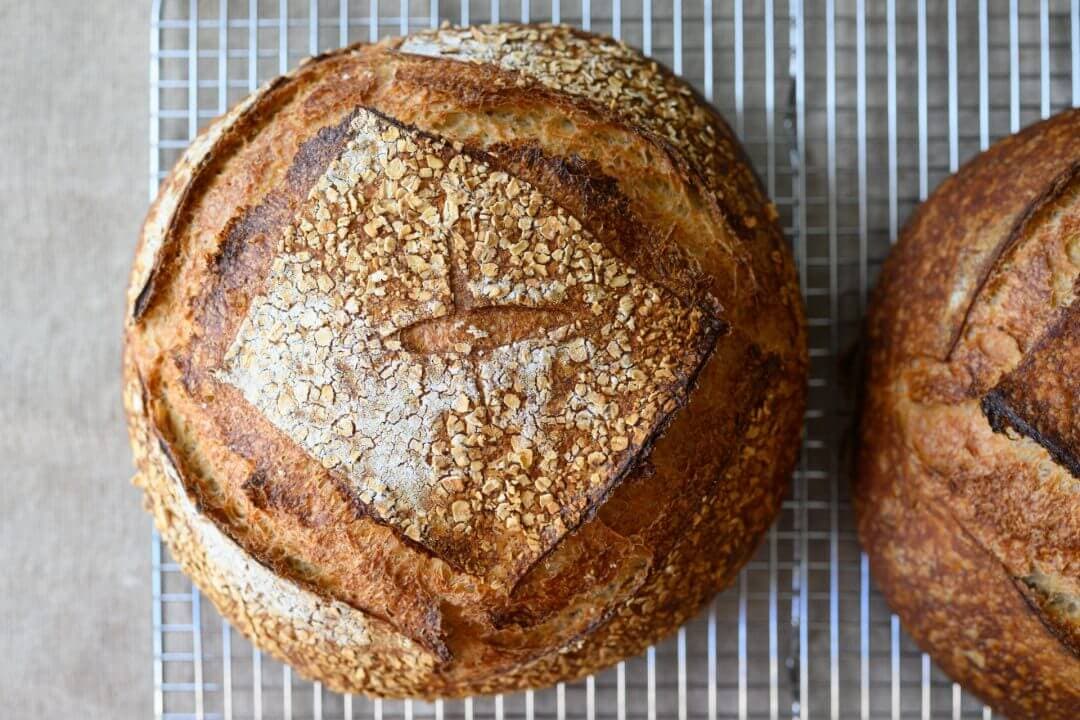 I like experiments. You know, the whole scientific method and all that: forming a hypothesis, testing, observation, recording results, and finally, a conclusion with perhaps an updated hypothesis at the end. I used to have fun at the school science fair every year, not because my projects were incredibly complex or groundbreaking (although my mom did help me make some pretty rad human-like lungs, once), but because it was fun working on something completely outside of the curriculum. A chance to dig deep into something itching my brain. And while this post's experiment—and that's exactly what it is—might not break out of the spectrum of baking sourdough bread, it does involve something I've not done for a long while and also something I've never done before: malting grain.

I've sprouted grain in the past but never milled the sprouts into flour. My hypothesis for this post is that sprouting wheat, drying it, and then milling it into flour mixed into the dough will lead to increased flavor (sweetness and nuttiness) and crust coloring. And as bakers, we already know malt can benefit the dough, but will my homemade malt yield the outcome I'm seeking?

This post is a little more effort than just a standard mix-and-bake, but these deep dives are a fun way not only to learn something new but also to explore a facet of baking we might otherwise overlook. To examine a part of the process, we might take it for granted (your miller no doubt augments your flour with malted barley flour or another form of amylase to balance enzymatic activity). And finally, it's just plain fun.

But first, let's talk about malt.

When a grain such as wheat or barley is sprouted, enzymes (amylase) inside the grain activate and begin breaking down the starch locked up in the endosperm, producing maltose (sugar). Maltose is what provides the fuel during this germination, allowing the grain to grow the little sprout you see emerging in the photo above.

At this point1, the sprouting grain is dried and kilned to stop the germination process. Kilning at an adequately high or low temperature determines whether the resulting malt will be diastatic or non-diastatic.

If the grain is kilned at a sufficiently high temperature, the result is a non-diastatic malt with enzymatic activity eliminated. Non-diastatic malt is what I'm making here in this post and is typically used as a flavor and nutrition additive only (because no amylase activity will exist). Non-diastatic malt powder (or malt syrup) is high in maltose and can impart a nutty/malty flavor to a dough.

Conversely, if kilned at a lower temperature (I've read around 105°F/40°C or below) the result is diastatic malt that has enzymes still active. These enzymes can aid in fermentation by helping to convert more starch to sugar and is especially helpful in long-fermented doughs (like many you'll find here). These additional sugars help fuel fermentation, show up in terms of flavor, and also impart additional color to the crust through caramelization as your dough bakes.

The distinction between the two is very important. If I were to add 15% diastatic malt to this dough instead of the non-diastatic I'm aiming for, I'd certainly end up with a significantly gummy interior and a reddish crust that just looks off. This is why you'll typically see recipes call for diastatic malt at less than 1%—too much is a bad thing in this case.

How to Make Your Own Non-diastatic Malt Powder

As discussed above, there are three steps to malting: 1) sprouting the grain, 2) dehydrating or roasting the sprouted grain (also called kilning), and finally, 3) milling. Overall this is a straightforward process and only took a few days of minimal work on my part. Let's look at sprouting, first.

It took my hard white wheat about two days to fully sprout. Once they sprout, you can cover the jar and place it into the fridge if you don't plan to mill soon after.

I used my Brød & Taylor Sahara food dehydrator (which they sent me for my previous Cinnamon Raisin Sourdough sponsored post) to dehydrate the sprouted grain. I set the dehydrator to 165°F (73°C) and let it run for 2 hours. At this temperature the enzymes present will be completely denatured, ensuring the milled flour will be non-diastatic.

Be sure the sprouted wheat is completely dry before milling, if not, continue dehydrating until they're dried through and through.

If you don't have a food dehydrator, you could also roast the grains in your oven, just be sure to keep an eye on them because they can scorch rather quickly (the dehydrator does an excellent job at evenly dehydrating).

I milled the sprouted wheat as I would any raw wheat berry using my Mockmill 100 set to very fine. Be sure to do it early enough so the grain can cool before mixing into a dough.

Refer to the process listed earlier in this post for instructions on making malted wheat.

I begin sprouting the wheat 2 days before my planned mix day. Once your wheat begins to sprout (this typically takes 2 days for me) and you see relatively long shoots emerging from the berry, place your jar of sprouted wheat into the fridge, covered, to halt the process. Or, if the timing works out, start dehydrating right away. Alternatively, you can dehydrate and mill the flour the day before you plan to mix.

When your sprouted wheat is fully dehydrated, mill as you would any whole grain berry using your grain mill. Be sure to give your flour a few hours to cool down after milling before using it to mix into your dough.

Add the called for mature sourdough starter, water, and flour listed in the Levain Build section above to a clean jar. Mix well and cover for 3-4 hours until mature and ready to use in mixing.

Add the called for flour (including homemade malt) and all but 50g of the water to a mixing bowl. Using your hands, mix to incorporate the ingredients until there are no dry bits of flour remaining. Cover, and keep somewhere at warm room temperature until it’s time to mix.

Add the liquid levain, salt, and remaining water to the mixing bowl holding the autolysed dough. Using your hands, mix everything until it comes together into a shaggy mass. Then, dump the bowl out to the counter and slap and fold the dough for about 8 minutes to develop strength. Alternatively, you can keep the dough in the bowl and do a series of stretch and folds with one hand as you rotate the bowl — 50 or so will suffice.

Transfer the dough to a container for bulk fermentation and cover.

Let the dough rest after the last set of stretch and folds for the duration of bulk fermentation.

Dump the contents of your bulk fermentation container to an unfloured work surface. Lightly dust the top of the dough with flour and, using a bench knife, divide the mass in half.

Gently preshape each piece of bread dough into a round on the counter using your bench knife and a flour-dusted hand. Let rest for 35 minutes, uncovered.

Congruent with my last pan loaf post, I’ve been using quick-cooking oats to top many of my loaves. I did the same here for one of my boules, and I'm still loving their texture and added nutrition, but this is optional.

Shape each pre-shaped round into a boule. I shaped mine in the same way shown in my boule shaping guide.

Cover both baskets and place in the fridge to proof overnight.

The next morning, preheat your oven with baking stone/steel for one hour at 450°F (232°C).

Load your dough using one of the two methods listed above and bake your loaves for 20 minutes with steam. Then, remove the steaming pans from inside the oven (or remove the lid to your combo cooker) and bake for an additional 30-35 minutes, or until done.

Once fully baked, cool your loaves on a cooling rack for 1-2 hours.

All-in-all I'd say this experiment met my hypothesis: malting my own wheat added flavor and ample crust color. The flavor of the malt didn't spring forward in an intense way, but a slight nuttiness was there at the end of each bite. Further tests (this is the observation → iteration part of experiments!) will include higher percentages of malted wheat and also an attempt at roasting the sprouted wheat at a higher temperature. My hope is that higher temperatures will encourage more caramelization in the sprouted grain and bring forward more flavor.

The crust on these loaves turned out wonderful. The high heat from the oven caused them to pop up dramatically and open up just right at the score. That area between crust ridges grew deep and wide, seemingly containing all the colors one wishes to see in a bake.

There's no doubt these had ample color in the crust, likely helped by the addition of the malt. Even though it was non-diastatic, the added sugars stuck around until finally caramelizing on the exterior during baking.

As I said earlier, I'm still fascinated with the texture (and aesthetic!) of the instant rolled oats spread on top. They add a little extra crunch, a little surprise, not unlike how puffed rice adds textural interest to granola or candy.

The interior of this bread was supremely soft and tender, light in hand, and had just the right mouthfeel. Using low-protein flour, whole wheat, and freshly milled sprouted wheat made for a loaf of soft bread.

This kind of loaf begs for harsh toasting, top-tier sandwich materials, or in my case, a spread of high-quality jam—and it just so happens to be jam season. Serendipity.

Heavily toasted and topped with fresh-made apricot (from my parent's tree), maple syrup, vanilla, and brandy jam4 made for an incredible morning. I didn't even need butter.

This bread has a very mild, nuanced flavor. As mentioned, I wouldn't say the malted wheat shows through so powerfully as to be immediately noticeable, but a nutty flavor comes through at the very end of each bite—a welcome addition, to be sure.

Thank you so much to Brød & Taylor for sponsoring this post! As always, the recipe, thoughts, and opinions here are my own.