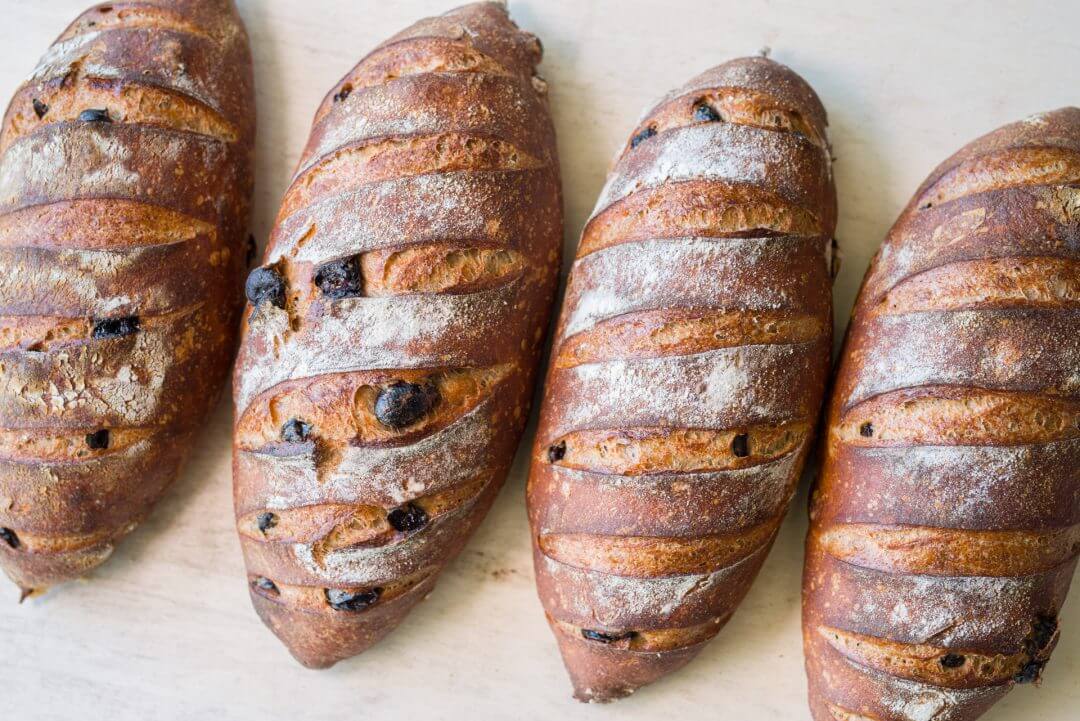 Cinnamon—a spice that didn't find its way into much of the food from my childhood, but somehow as I've grown older, I find myself enjoying its sharp, but warm, flavor. It needs a counterweight, though, doesn't it? Something to balance it, to take off that blunt edge, so the character is more of a warm, inviting thing rather than something that evokes a pucker or cockeyed stare at the baker. Enter: raisins. Not just any raisins, mind you, but homemade raisins. And the two of these go so well in this cinnamon raisin sourdough.

As you know, I tend to take things a little farther, just one step beyond. But there's additional satisfaction to be found in making or carefully sourcing every component of a loaf of bread. Whether you end up making your raisins or using store-bought, pairing them with cinnamon in a naturally leavened cinnamon raisin sourdough results in a loaf that not only looks stunning but tastes equally as much.

The crust on this bread exudes a slightly reddish hue in the right light, quite the stunning cast and something not totally expected in a loaf of bread. Next, the eye traverses from top to bottom, hopscotching from plump, dark mass to mass, wondering what could possibly be protruding from a crust in such a way. I think the beauty in this loaf starts before you even take a bite, and of course, you'd be let down if the flavor didn't match the aesthetic, but brush those worries aside: it's downright delicious.

Depending on your affinity for cinnamon, this loaf might conjure feelings of either warmth or sharp spice—and for me, it's the latter—but I kept the percentage of cinnamon low enough to keep balance. It's just right, just enough to stand up to the sweet raisins but not so much that it becomes overpowering. However, feel free to play with this percentage to suit your liking, and additionally, the potency of cinnamon can vary.

I used all Central Milling organic flour for this recipe but use what you have on hand that has similar specifications as listed below (if you have locally milled flour, fantastic!). King Arthur All-purpose Flour and King Arthur Whole Wheat would also work very well.

At thirty-percent, the whole wheat flour provides a lovely backdrop for the sharp cinnamon and sweet raisins. Increasing this percentage and freshly milling your flour would undoubtedly lead to an increase in flavor, and it's something I'll be playing with once I make another batch of raisins. Whole wheat and cinnamon go incredibly well together.

At high percentage, cinnamon can interfere with fermentation, likely due to its antimicrobial properties1. There are a few techniques I used in this recipe to help offset this:

Fermentation was slightly sluggish at the start, but as you can see in the pictures in this post, there was plenty of activity toward the end of bulk fermentation. The key is to adjust my timeline below to fit your dough's progress. As I always like to say: “give the dough the time it needs.”

I recently received a new Brød & Taylor Sahara Food Dehydrator (they provided it to me for this sponsored post), a superbly designed dehydrator that eliminates the reason why I've not bought one previously: this one folds up into a compact little package for storage. Upon receiving it ideas for its use in a baking recipe swirled around in my head, everything from dehydrating my own spent beer grains to making diastatic malt to dehydrating veggies and fruits of all kinds. I settled on making a recipe I've meant to tackle for a while now: a cinnamon raisin sourdough bread.

To make the raisins buy a couple of pounds of the smallest red grapes you can find at the market. Pick grapes that are not mushy in any way, you want them firm, ripe, and full of flavor.

Wash the grapes and let them dry. Then spread them out evenly on the dehydrator trays. Set the unit to 24 hours at 135°F and hit Start. After this time check on them, they'll likely need another 12 hours to dehydrate fully — mine took about 36 hours in total. This process does take quite a while so plan accordingly for your bake (I did this a few days before preparing my dough).

I realize after eating these raisins I've never had anything like them in my life. They pack so much flavor, eating each one makes you pause to really enjoy everything the original grape had to offer — nothing is lost.

If you don't have a food dehydrator pickup some Thompson raisins at the market for this bake, they'll work quite well (but won't be as plump and pack the same flavor, to be sure). I'd suggest soaking the store-bought raisins for a few hours, or overnight, before incorporating them into your dough (I didn't find this necessary with homemade raisins). Soaking will allow them to absorb water and help prevent burning in the oven if they find their way to the outside of your dough. Be sure to drain them thoroughly before use.

For an in-depth discussion on temperature when baking, have a look at my post on the importance of dough temperature.

Add the called for flour and all but 100g of the water to a mixing bowl. Using your hands, mix to incorporate the ingredients until there are no dry bits of flour remaining. Cover, and keep somewhere at warm room temperature until it's time to mix.

See my guide to the autolyse technique for more information on its benefits.

Add the mature levain, salt, and about half the remaining water to the mixing bowl. Using your hands, mix everything until it comes together into a shaggy mass. Then, dump the bowl out to the counter and slap and fold the dough for about 5 minutes to develop some strength. Alternatively, you can keep the dough in the bowl and do a series of stretches and folds with one hand as you rotate the bowl — perhaps 50 or so will suffice.

At the end of this initial strengthening, the dough should have smoothed out and will loosely hold its shape on the counter (or in the bowl). Add the cinnamon and remaining water to the dough and gently massage to incorporate. It is not necessary to overwork the dough to get the cinnamon incorporated, just enough to spread it around.

This dough required a little extra fermentation time in bulk fermentation (as described in the Total Formula section, above). Even with a final dough temperature of 79°F (26°C), I went a full 4 hours — you can see the state of the dough at the end of this period below.

Give the dough 2 sets of stretch and folds during this four hour period, starting after the first 30 minutes, then 30 minutes thereafter. After the second set, let the dough rest untouched for the remainder of bulk fermentation.

Dump the contents of your bulk fermentation container to an unfloured work surface. Lightly dust the top of the dough with flour and, using a bench knife, divide the mass in half. Then, divide each half in half again to create four 500g pieces. Lightly form each piece into a round on the counter using your bench knife and a flour-dusted hand.

Let the dough rest for 30 minutes until it relaxes outward some degree.

Dust your proofing basket with either white rice flour, or a mixture of white rice flour and white flour. This helps to keep the dough from sticking to your basket but also leaves a thin layer that adds to the look of this loaf after it's baked.

I shaped each 500g into a heavily tapered batard. I essentially used my batard shaping technique but rolled a few extra times out at the ends to create a well-defined tip. You could also shape these as little boules.

Completely cover each proofing basket with reusable plastic and place in the refrigerator to proof overnight.

I baked two of these at a time in my home oven, but you might be able to bake all four side-by-side, depending on how wide your baking stone/steel is. If you do two at a time, keep the other two in the fridge until you're ready to bake them.

Remove your dough from the fridge, uncover, and dump onto parchment paper. Using a straight-edged razor blade, score each straight in at 90° to the dough in a series of slashes from top to bottom. I like the direction of my hand to move at a 45° from side to side to create a series of stripes that open evenly.

Slide each piece of parchment paper holding the dough into the oven. Then, after all the dough is loaded, steam your oven and close the door. Bake at 450°F (232°C) for 20 minutes with steam, then open the oven door, remove the steaming pans, and bake for an additional 20-25 minutes at 425°F (218°C). Note that because these loaves are a smaller dough mass than my typical 900g – 1kg, they will bake a little faster than you might expect—keep an eye on them toward the end of the bake time.

Remove the loaves from the oven and let cool on wire racks for 1-2 hours.

I chose to shape each loaf of this cinnamon raisin sourdough as a smaller, more petite, batard because the flavor of each slice is pronounced. The smaller cross-section of each slice still lays up ample flavor and satiety — although to be honest, I pretty much always end up slicing two to three at a time… You'll understand once you get to baking this beautiful bread, trust me.

These taste exceptional when heavily toasted and simply topped with a slather of cultured butter. It has that warm, savory, and sweet checklist totally complete.

This scoring pattern looks beautiful on small oval loaves like this. In addition, the raisins peeking out, dusting of white rice flour, and reddish hue work together to make an all-around stunning bread.

These loaves have consistent and even fermentation throughout. The bread is light in hand and wonderfully open—just what I was looking for. As I mentioned throughout the post, give the dough a little extra time in bulk and proof as needed. For me, a full 4-hour bulk and 16-hour cold-proof provided just the right amount of fermentation to open up the interior sufficiently and produce a tender crumb.

Homemade raisins really elevate this bread to the next level. Sure, it takes extra time and a little effort to make them, but it's that extra step that sometimes brings even more joy to the process of making homemade sourdough bread.

The flavor of the whole grain flour helps ground the taste of the sweet raisins while the cinnamon rounds it all out. It's a well-tuned concert of flavor, texture, and sensation that's pleasantly punctuated by the plump raisin at just about every other bite. Those pops of flavor snap your attention back to the task at hand: eating healthy and nutritious sourdough bread made at home with your own two hands.

Thank you so much to Brød & Taylor for sponsoring this post! As always, the thoughts and opinions here are my own.