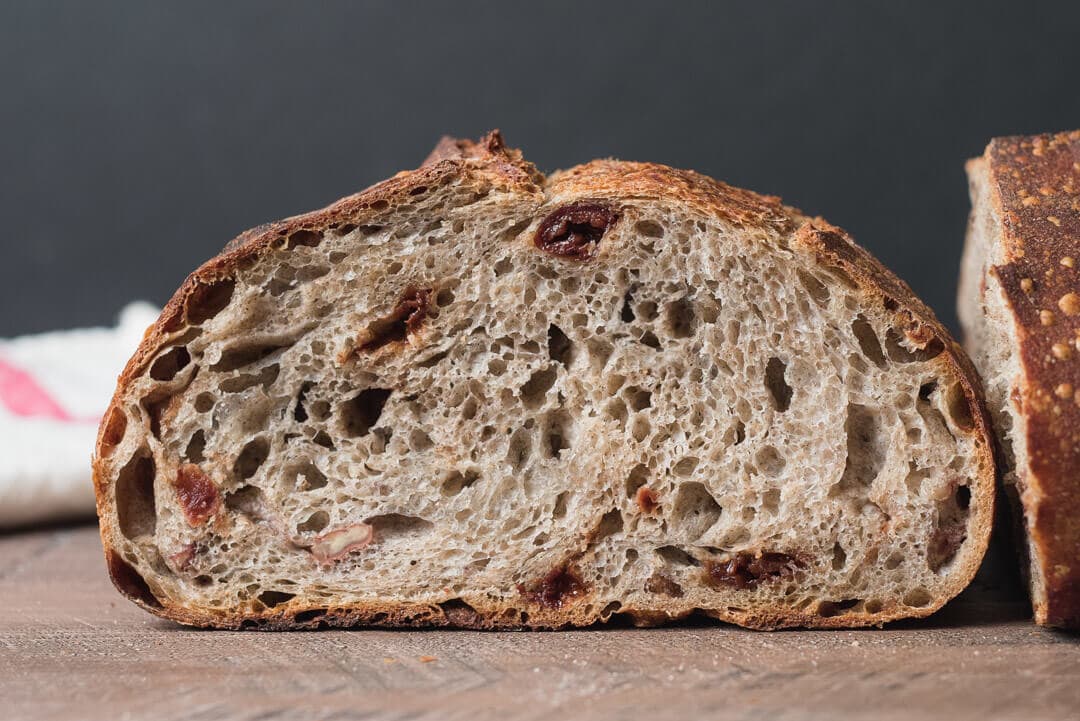 My childhood home had a craggy, sprawling cherry tree in our backyard where my brother and I would climb day after day. The heightened frequency of our climbing adventures and the arrival of the cherry season was not entirely unrelated. Each trip up, swinging and snaking through the litany of maroon branches, was punctuated with a delectable snack somewhere near the end. Of course, the acquisition of said snack didn’t come without its battle with a brash bird or two1 and even the occasional angry ant, but this was the price the tree demanded. Serendipitously stumbling upon that bunch of ripe cherries was reward enough for the surprising sting or feather in the face.

It’s during the cherry season that I remember my childhood backyard the most. Probably because of the endless cherries we snacked on but also because the tree seemed to be an integral part of our yard, a friend almost, even if it was just one amongst many other fruit trees. During the hot summer days off school, we walked barefoot under its branches only to have the soles of our feet stained red from the fallen fruit discarded by the birds or scattered about by the rough winds.

While it’s not cherry season right now, I couldn’t quite shake a recent happy accident which was the impetus for this entire recipe: a friend’s cherry preserves spread on my toasted sprouted buckwheat sourdough. The flavors instantly transported me back to childhood and my favorite tree. I knew I wanted to work with cherries right then and a flavor profile for this formula began to take shape in my head: cherries, buckwheat, and roasted pecans for a slight buttery, rich note.

The next trip to the market resulted in my purchase of several packages of dried sour cherries (you can buy these cherries online at a much better price) and some whole pecans. In addition to these two complementary flavors I knew cherries and buckwheat would also work well together — the earthy buckwheat grounds the sweet and sour cherries, it mellows their strong flavor and provides balance.

My (not so) secret love affair with buckwheat flour continues in this bread. I like to use buckwheat where I need a grounding flavor, something to balance out sweetness or add depth and complexity. I've found including more than 3-5% results in a tighter crumb as the percentage increases, but more than that, 3% seems to be the perfect percentage for me in terms of providing enough flavor without too many side effects. You can certainly work this percentage up if you want even more intense flavor from the buckwheat.

Aside from the buckwheat, the rest of the formula utilizes mostly medium-protein white flour and some strong white flour to help support the added pecans and cherries. Some straight 100% whole wheat would be a nice addition to this formula in place of some of the white flour if you prefer a heartier, more flavor-forward bread.

As always, if you don't stock type-85 flour you can substitute the quantity called for with 30% whole wheat and 70% white flour. This is not an exact substitution, but it will get you close in terms of flavor and crumb color.

Note that if you plan to bake this bread in a Dutch oven, you might want to reduce the total dough weight here to 1800g or so to ensure they'll fit comfortably. Lately, I've been making slightly larger, and longer, batards at 1kg each.

Build the liquid levain (everything listed in the Levain Build section above) in the morning and store somewhere around 78°F (25°C) ambient. This is a very warm and fast levain and the high inoculation percentage, whole wheat flour, and warm temperature will ensure it's ripe after 3 hours.

Mix all the flour (including buckwheat) and water (reserve 100g water for the mix, later) in a bowl until all dry bits are hydrated. Cover bowl and store somewhere warm for 1 hour.

At this time also toast the pecans in the next step.

Preheat oven to 350°F (175°C). Spread whole pecans in a single layer on a baking sheet. Once the oven is preheated place the sheet into the oven and toast for about 10 minutes. Rotate the baking sheet after about 5 minutes and keep an eye on the nuts in the last few minutes as they can quickly burn.

The nuts are done when they are slightly browned and have a pleasantly pungent smell. Set aside to cool, then coarsely chop and reserve until needed during Bulk Fermentation.

Add the called for levain and about half of the reserved water to the mixing bowl. Mix until well combined.

Dump the dough onto the counter and slap and fold the dough (French fold) for about 5-6 minutes, just until the dough starts to show signs of a smooth surface. If you aren’t comfortable with slap/fold method or don’t like it, you can do stretch and folds in the bowl until the dough tightens up and becomes harder to stretch out and fold over.

When finished with the initial strengthening, sprinkle the salt on top of the dough and use the remaining water to help dissolve. Pinch through a few times and fold the dough over itself to help incorporate. Perform a series of stretch and folds in the bowl until the dough absorbs all the added water and comes back together.

Transfer dough to a tub or thick-walled bowl for bulk fermentation.

Perform a total of 3 sets of stretch and folds during bulk fermentation, spaced out by 30 minutes.

After the second set of stretch and folds add the toasted & chopped pecans and the sour cherries (these can be whole or coarsely chopped). Using a little water on the hands, mix gently into the dough until well incorporated.

I decided to end bulk when I saw the dough in the picture below. You can see the dough is puffy and alive, there are plenty of bubbles on top and just below the surface, and most importantly: the edge where the dough meets the bowl is domed, convex. This is a good sign your dough is strong enough and ready to be divided.

Dump the dough from the bulk container to an un-floured work surface. Divide the dough roughly in half and very gently preshape each piece of dough into a loose round.

Flour the work surface and the top of each rested round. Working with one at a time, flip a single round over onto the floured surface and fold the top half up and over to the middle and the bottom half up and over the recently folded top. You’ll have a long horizontal rectangle sitting in front of you. Turn the rectangle 90º and grab a small portion of the top, pull up and fold over a little bit, pressing down to seal. Take the rolled top and continue to gently roll it down toward your body with two hands working together. As you do each roll and work your way down the vertical rectangle, use your thumbs to gently press the dough into itself.

Once shaped, transfer each to a basket lined with a cotton towel (I like to use these towels when the dough has fruit added, much easier to clean) that has been lightly dusted with white rice flour, seam side up.

Take out both of the baskets from the fridge and cut a piece of parchment paper to fit over the top, quickly invert each basket onto each piece of parchment. Using a sharp razor blade fastened to a stick (or a lame) score the top of each at a shallow angle to the dough and just deep enough to cut below the top skin of the dough. Start at the top of the oblong loaf and with a single decisive stroke cut from top to bottom with a slight outward bend.

Bake the dough for 25 minutes with steam, then remove the steaming pans from inside the oven. Then, continue bake for an additional 30-35 minutes or until done.

I steamed my oven in my usual way, described here in my post on how to steam your home oven for baking.

I've worked with fruit and nut mix-ins countless bakes in the past but this one has a little something extra thanks to the buckwheat. Even at such a small percentage, it's beautifully evident in each bite, and to those unfamiliar, it hints at something complex and earthy without giving away the answer too easily. I find that pecans and cherries have always been known to go well together, but the buckwheat is really what unites this bread, adding additional complexity and that haunting flavor I've come to really enjoy. This is just an all-around tasty bread, one that can be eaten by the slice all on its own — perhaps a little too easily.

A wonderful crust to be sure and one that, while not as shiny as my other bakes (probably due to the buckwheat), is splendidly crunchy. I went with a double score for these bakes because I knew they wouldn't spring open as much as my typical batard, partly because of the hefty ingredients but also because of the lengthy proof. Besides, that double score sure looks awesome.

The crumb in this bread is so incredibly soft and tender, something almost akin to a porridge bread. Almost. The crust did bake up a bit thicker than usual, but by no means too thick, and that's just fine as it complements the tender interior, providing structure and support. If you've read my posts for a while you know one thing for sure, you'll rarely hear me complain about a crunchy crust.

As I mentioned earlier, the flavor pairing of buckwheat and cherry is fantastic. The dark red cherries stand up to the earthy buckwheat flavor and the two balance each other. Buckwheat has really become a secret weapon of mine–when I sneak a little in a formula people always comment that there's “something different and totally delicious in this sourdough.” I like that!

When I add mix-ins to the dough I prefer to usually keep it pretty light. I think the percentages I've included in this recipe for the toasted pecans and sour cherries are just right: almost every bite results in the discovery of something extra. However, if you prefer more or less just adjust the quantity of each up or down to suit.

I've been enjoying this bread heavily toasted with a thick slather of the yellowest butter you can find — that's all you need.

The crumb is speckled with black marks from the whole grain buckwheat, coarsely littered with sour cherries and toasted pecans, and the crust is nice and craggy just like the old cherry tree I used to climb each day in the summer. Having baked this bread several times now I feel satiated, I scratched that itch to return back to my childhood and, in some way, relived those moments with my favorite tree. Unfortunately, the bread will eventually run out but that's just fine, I can always make this recipe any time I need to take a trip back and relive those red feet, scattered feathers, and antsy ants.