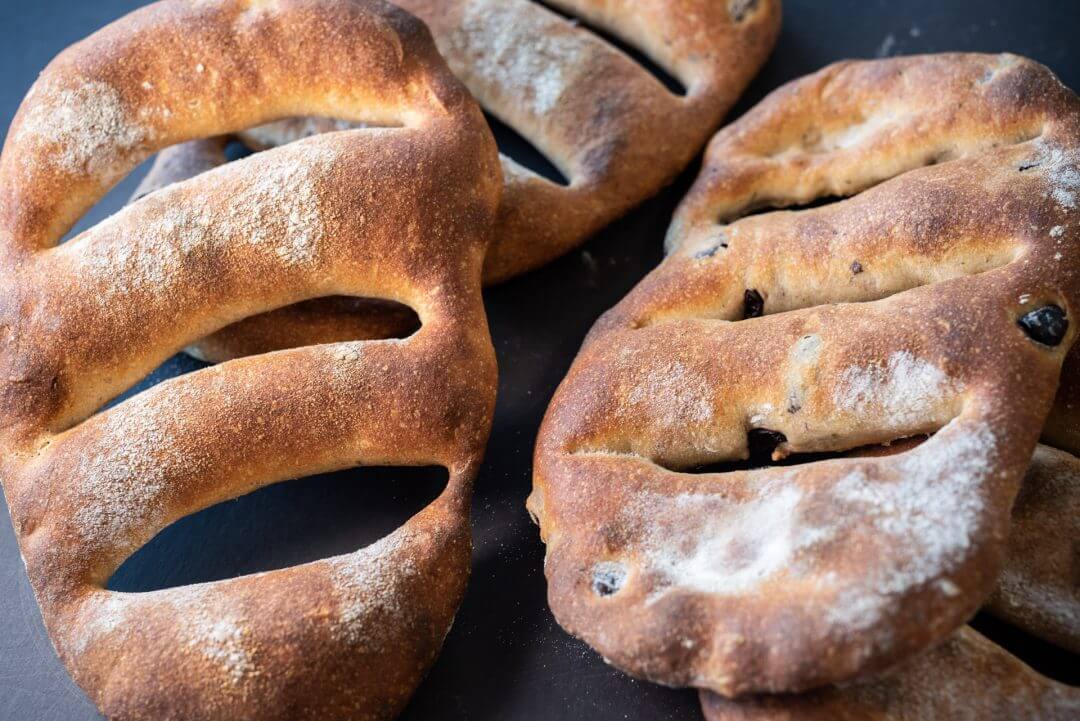 When placed in the oven, these sourdough fougasse look no more than cut, mangled pieces of scrap dough. After a few minutes, they begin to rise, to transform with the look of a chunky poolside inflatable ladder. And I mean that in the best possible way. They puff up and harden quickly, creating a crust-to-crumb ratio that definitely leans in favor of the crust. They're soft, chewy, and delicate inside, but the exterior, with occasional olive poking through, hardens off to just-crunchy-enough.

The French fougasse shares many of the same traits as the Italian focaccia. My approach with this recipe followed much of the same path as my focaccia recipe: a same-day dough that's meant to be quickly put together in the morning and ready for dinner.

The focus of fougasse is to maximize the crust. When you cut the dough just before baking, you're increasing the surface area of the dough exposed to the heat of the oven—imagine the cornicone1 of a pizza baked just a bit longer than usual. It begs to be torn, ripped, and then dunked. And, rightly so, these make incredible contributions to a group dining table.

The whole wheat flour called for in this recipe can be flour from the market (or a local mill) or freshly milled—I've made them both ways with excellent results. I've worked in freshly milled hard red wheat, durum wheat, and even , all iterations have turned out fantastic.

There's no levain created for this recipe, it's a same-day dough using a portion of your sourdough starter as the preferment.

For timing flexibility, you can also retard the dough in bulk overnight for a two-day dough. I've done this (as seen here on Instagram) and it works very well: place the dough in bulk into the fridge, covered, after the first two hours of bulk fermentation. The next day, take the dough out, preshape, shape, and let proof on the counter until ready to bake.

In the recipe below I used pitted kalamata olives but other types of olives, such as Castelvetrano or niçoise, would also work very well. Whatever the choice, be sure they're pitted and I like them drained and coarsely chopped.

For an in-depth discussion on temperature when baking, have a look at my post on the importance of dough temperature.

Add the called for flour and all but 50g of the water to a mixing bowl and mix by hand until incorporated. Cover and let rest for 30 minutes.

Measure out the called for extra virgin olive oil, de , and kalamata olives. Drain the olives and coarsely chop them to your preference.

Add the extra virgin olive oil to the mixing bowl and mix by hand (or with mixer) until fully incorporated. The dough should come back together and regain its smooth appearance. Add the herbes de Provence and olives and gently mix to combine (you don't have to completely disperse the ingredients, your folds during bulk fermentation will help later).

Transfer the dough to a bulk fermentation container.

Perform two sets of stretch and folds during bulk fermentation, the first set starting 30 minutes after bulk fermentation begins (10:00 a.m.). After the second set, let the dough rest, covered, for the remainder of this time period.

Divide the dough when it's risen significantly in the bulk container, the edges where the dough meets the container are domed down, the top surface is smooth, and if you shake the bowl a bit, the dough will jiggle. If the dough still looks dense and not active enough, give it another 15-30 minutes to rise further.

I baked this sourdough fougasse on two racks in my oven, each rack holding two pieces side-by-side. Alternatively, you could bake two at a time if you only have a single baking stone/baking steel.

Cut two large pieces of parchment paper, wide enough to fit in your oven and baking stone or baking steel.

First, dust the parchment paper with flour in the areas where you'll place each round. Then, flour the top of each round and flip it over onto the parchment paper using a bench knife (seen above, upper-right). Finally, flour the top of the inverted round. Using a straight-edged rolling dowel, gently roll out the dough into an oval shape (seen above, lower-left). Roll the rounds out almost as long as you'd like the final shape to be, with the knowledge that we'll later stretch them out further.

Using large plastic bags (or inverted mixing bowls), drape them over the long ovals to prevent excessive drying during their proof. These bags tend to stick so you can grease them or prop them up a bit to keep them off the dough.

I like to lightly dust the top of the ovals with white rice flour to ensure our bench knife/pizza wheel doesn't stick to the dough. Alternatively, you could dust them with white wheat flour.

Using a small bench knife or pizza wheel, make two to four diagonal cuts into the dough starting from the top working your way down. Be sure not to make too many cuts and keep the blade from reaching too close to the edges. After cutting, gently grab the dough and stretch the cuts open to ensure they don't seal back together during baking.

If you didn't dust the parchment paper sufficiently the dough could stick when you go to stretch them, do your best to separate the cuts — if they are too close they might seal back up during baking, which isn't a big deal.

Slide the parchment paper with dough into the oven and steam your oven. I steamed my oven per my usual home oven steaming method except I didn't use the pan with rolled up towels, just the pan with lava rocks. If you don't want to go to that extreme, you could simply spray heavily into your oven after loading the dough.

Here's my YouTube video of how I steam the oven:

Bake at 450°F (232°C) for 20 minutes with steam, then open the oven door, remove steaming pans, and bake for an additional 5-10 minutes at 400°F (204°C) until done to your liking: they should be deeply colored but still light in the inbetween areas. The longer you bake them, the crunchier they'll become.

Remove from the oven and let cool on wire racks. These are best the day they're baked but hold up well into the next day (reheat them for a minute or two under the broiler).

The touch of lavender in my herbes de Provence filled the house with an incredible aroma when baking this sourdough fougasse. That, coupled with the earthiness of the kalamata olives, waiting thirty minutes for these to get out of the oven and onto your cutting board is a task. I'm a stickler for letting the bread cool before cutting into it, but mustering the required patience after pulling these from the oven test even the most steadfast.

Ample crust is the name of the game with a fougasse, and these deliver. Thin and crunchy, the crust provides the right chew and contrast to the soft interior.

I like to coarsely chop and drain the kalamata olives because their flavor can be somewhat strong, this way, they give a pop only occasionally. I kept the percentage of herbes de Provence on the low side because these herbs — especially lavender — can also be overwhelming. Everything in this mix is just the right balance for me, but if you find one is under-represented, increase it to your liking.